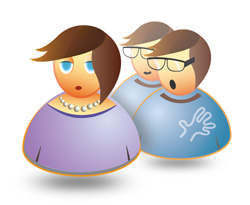 There were once two brothers and a sister, and they were managers at three companies.

The first brother was called Micro Manager, and he picked the most complex and integrated management tools, which were entrenched in the technical staff IDEs and into all their network activity, so that not a single line of code could be written without it being carefully logged. Not an hour could pass without justifying time spent; not a file could be opened without explaining why. Not a project could be created without designing a 100 leafed Gantt. And after a week everybody hated the system, and then they hated Micro Manager, and everybody was unhappy.

The second brother was called Over Simplify, and he didn’t want any kind of management apart from to-do lists. And everybody just had to-do lists, and for the first week everybody was happy. Then many started having long to-do lists, and some started worshipping them, and instead of working, they were compiling longer and longer personal to-do list. And every list was different from any other, and nobody knew what, when, how, and why, and everything was in a mess. And then they hated Over Simplify, and everybody was unhappy.

Their sister was called Reasonable Modesty, and she had minimal goals, had always clear that what matters is how people work and interact, and that software is always secondary, and should be flexible, not do too much, and not get in the way. She started evaluating Twproject.